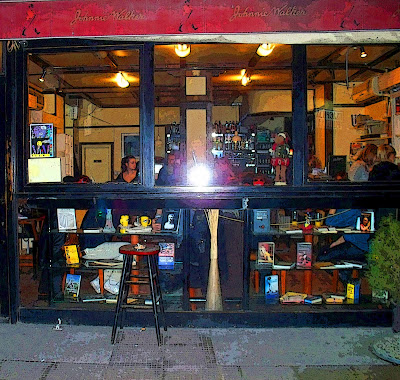 Thanks to Ana Lakaliska and Afrodita Nikolova (below), who organized the reading for Ms Siegel's Creative Writing class, we had a wonderful time. 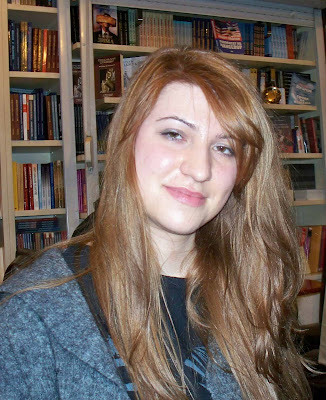 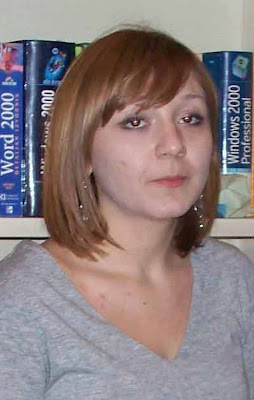 The event took place on February 20 at Cafe Magore. 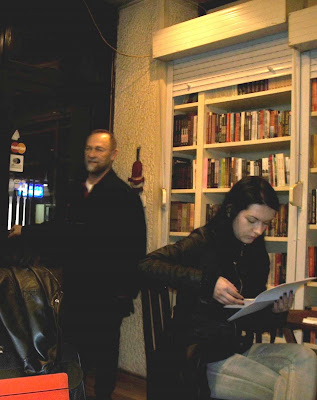 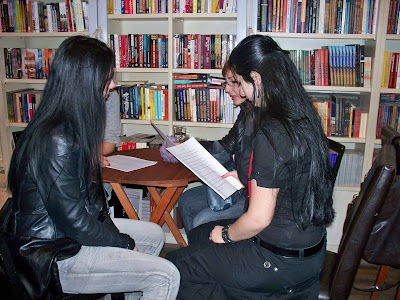 Zorica Petkoska practices her reading with Vera Sotirovska and another friend. 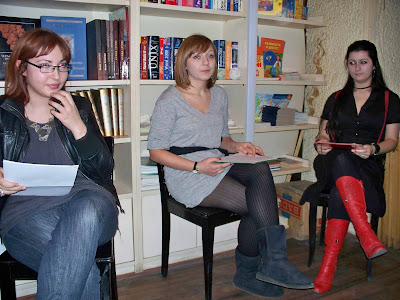 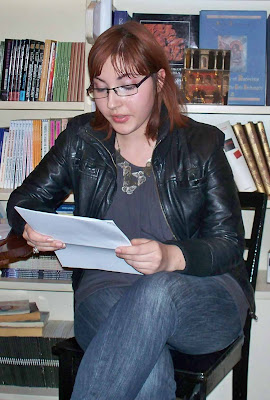 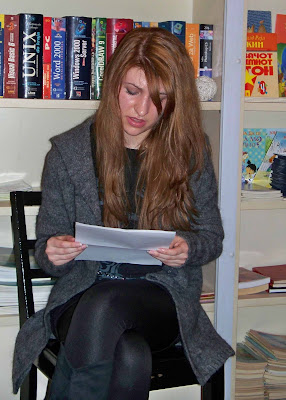 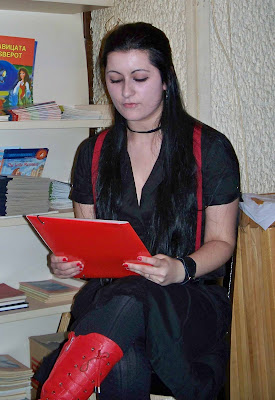 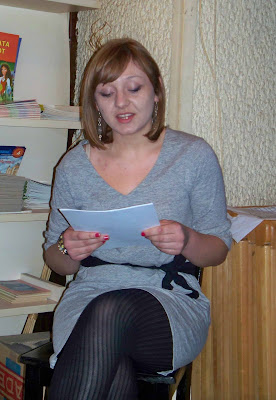 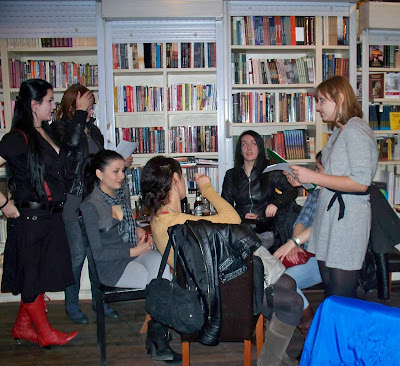 Getting ready for a second round of reading 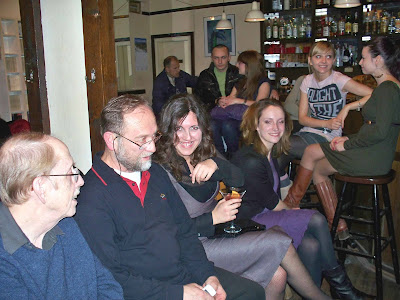 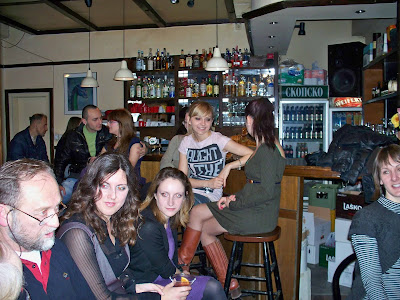 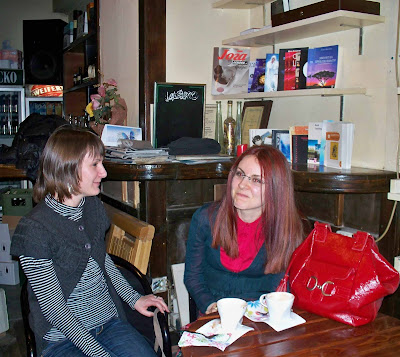 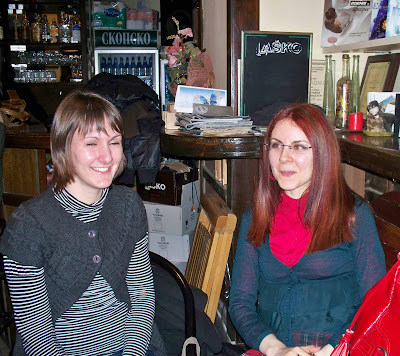 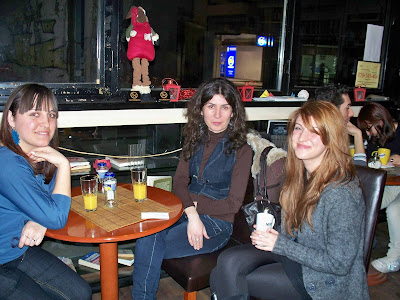 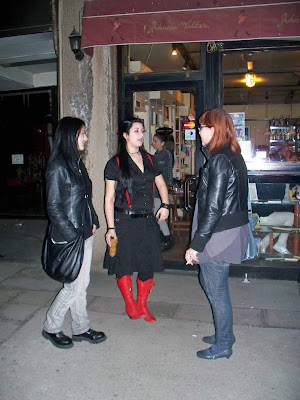 Break time! Zorica (middle) and Vera (right) with a friend 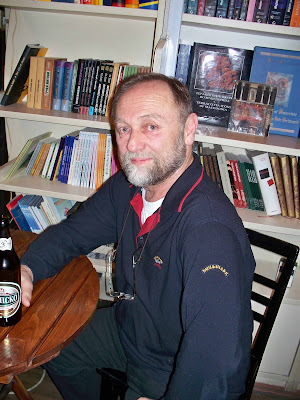 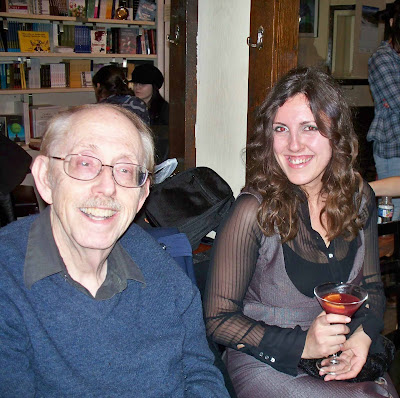 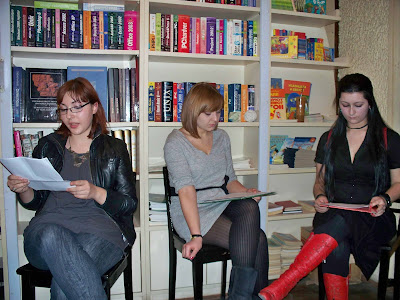 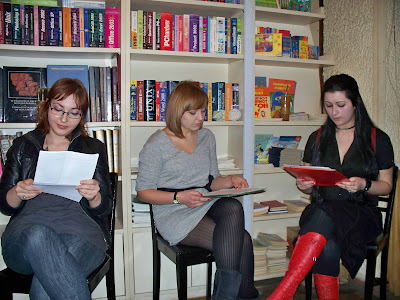 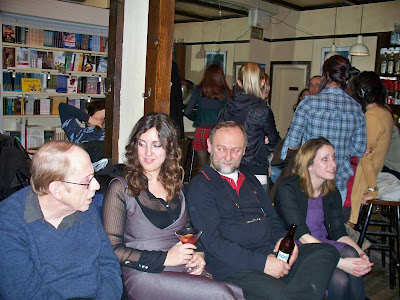 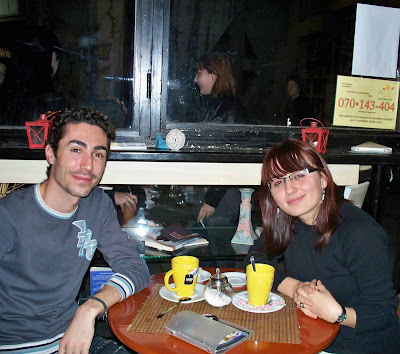 Posted by Jennifer at 2:33 AM No comments:


It's 3:00 a.m., and I have spent a good portion of last evening creating this video.

Enough said.
*
Posted by Jennifer at 6:14 PM No comments: 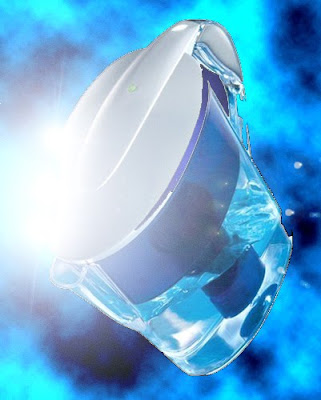 Everyone assures me that Skopje water is perfectly safe.

I don’t doubt it; still, I brought a pitcher with filters from the U.S.

The water that flows from the tap is thick, full of calcium, which you can see, taste, and feel as it slides down your throat. Esthetically, it’s a bit disconcerting when you feel as though you’re eating your water instead of drinking it. Moreover, cooking with it is nearly impossible--it thickens almost immediately and adds a grainy texture.

So for making coffee, mixing juices from powder, and cooking, I boil and then filter.

Every day, I boil water in a large pot and then allow it to cool before filtering it. This, of course, adds an extra chore to my daily routine, but it’s a bit like doing wash: once you place certain tasks in motion, it’s pretty much automatic.

Fill the pot with water, place on burner, turn to “3,” set the timer for 20 minutes (too easy to forget, otherwise), and go off to work on the internet or some other task. When the timer dings, make sure water is boiling, turn burner down to “2,” set timer for another 20 minutes, and leave. Second ding: turn burner off and move pot. Wait.

Once the water cools, I can filter about a quart at a time. Once it’s through the filter, I funnel it into a plastic two-liter Coca Cola bottle. Repeat until the pot is empty. Each pot fills about two Coke bottles.

It’s not like I wait around for the water to pour through; I leave it and do something else. Later, when I go to the kitchen for something to eat or drink, the water is ready, so I pour it and filter the next batch.

At any given time, I try to have on hand five bottles of filtered water, which I’m careful to rotate and use according to age. I have a system of moving older bottles forward and adding the newest filled to the back. It feels somewhat obsessive, but I would not wish to poison myself, spouse, or guests with expired water.

Bottled water is cheap here, about 18 denars (50 cents, more or less), for a 1.5 liter bottle; for drinking water, I buy Ladna because it comes in a really cool square bottle, and it tastes, well, like quality water.

So why bother going through the trouble of filtering water when I could just buy it? The short answer: I’d rather filter it than lug it home from the store and drag it up three flights of stairs to my flat. Today, I bought a 6-liter bottle of water, and I thought I’d die hauling it up.

In the U.S., I would scoff at the idea of boiling and filtering water, preferring to get my water straight from the tap for both cooking and drinking. In fact, if The York Water Company started spewing out calcified water from our taps, customers, including me, would be raising our voices in protest. But here in Skopje, this is the way it is, so deal with it.

In York, we buy bottled water only because my husband is under the mistaken impression that it’s somehow better than generic tap water. In fact, the U.S. bottled water industry is one of the biggest scams perpetuated on U.S, consumers; we have been sold a bill of goods because, for the most part, our tap water is pretty decent, probably better than some of the water in plastic bottles.

In Skopje, though, bottled water is a necessity; almost no one drinks straight from the tap. So, like American stores, the super markets here offer an array of water brands--the local Ladna, Jana, Gorska, Dobra Voda, and the imported Perrier and Evian, both seriously overpriced. Another tony brand comes in a square bottle with a white label and is priced at 52 denars. I have not tried it. It’s just water, after all.

You can find three kinds of water for sale: “still” water, water with gas, and lemon flavored water (gas or still). No silly flavors like raspberry watermelon or kiwi strawberry--just the basics.

The Macedonian brands are all priced about the same 18 denars, give or take a denar or two, and I see no difference in taste or quality.

While my Macedonian friends have assured me that the tap water is quite safe, they, too, drink bottled water (although they brew coffee and cook food with tap water); from what I understand, Macedonians who drink too much tap water tend to suffer from kidney stones from the excess calcium.

For me, the decision to boil and filter our cooking water is one of aesthetics; I want our water be clear and pure, even for cooking, so I’m willing to put in the extra time to make that happen.

Still I’m fairly certain that 10 months of drinking calcified water would not give us kidney stones, but why take the chance?

Filtering water is a kind of metaphor for the expat life, which often requires some small hardships for spoiled Americans accustomed to being pampered.

Overseas, we seem to be more accepting of situations we would not tolerate at home. We find ourselves adjusting our attitudes to fit within the prevailing culture. Had I moved to a primitive African tribe instead of a large European city, I might be pounding millet and dosing our water with purifying pills--it’s all about perspective.

As expats, we are more willing to put in the extra effort to create some semblance of familiar creature comforts, but we shouldn't be jerks about it--I would never tell a Macedonian that the city water grosses me out, so why don’t they organize a protest about water quality?

It may not be my favorite kind of municipal water, but it has served Skopje well, and who am I to say what is good or bad for someone else’s community?

Even though Skopje feels like home, I am, after all, just a guest here.

I have decided that I will worry about the water issue only in my own home; if a host serves me coffee or food made with unfiltered tap water, I drink or eat it without a thought and certainly no comment about water quality. Being a grateful guest trumps some personal aesthetic about the way I prefer my water.

At home: picky. Away: flexible.

I’m just so happy to be here, to be afforded the opportunity to experience someone else’s culture: teaching within their educational system, enjoying their food and drink, visiting good friends, listening to their music, viewing their art work, and buying their crafts.

Meanwhile, at home, I’ll quietly continue boiling and filtering my water.
*
Posted by Jennifer at 4:42 PM No comments:

*
*
Moved to Corpus Delicious, a dedicated space for this novel-in-progress.
*
Posted by Jennifer at 1:59 PM No comments:

5. Corpus Delicious (a novel): The Coffee Break and an Important Epiphany

*
*
Moved to Corpus Delicious, a dedicated space for this novel-in-progress.
*
Posted by Jennifer at 5:49 PM No comments:

Labels: 5. The Coffee Break and an Important Epiphany, A-hh, Corpus Delicious (a novel)

*
*
Moved to Corpus Delicious, a dedicated space for this novel-in-progress.
*
Posted by Jennifer at 9:40 AM No comments: 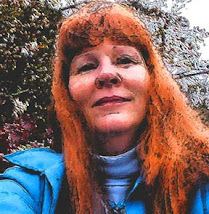